For the scope of this informational, the term “supplements”  in our hydroponics nutrients supplements ingredients glossary refers to any products growers use in conjunction with their regular fertilizer regimen. So, by this definition we can say that supplements are not essential to plant growth, but have the potential to be beneficial. With that said, let’s take a closer look at how some ingredients found in these supplements are intended to benefit growers.

Some growth stimulators  may be naturally produced by soil bacteria or fungi .

Ascorbate plays a role as a bio-stimulant, anti-oxidater (resists aging), and perhaps xylem formation. Xylem are the bundles of tubes within plants associated with the transport of moisture and minerals throughout the plant.

is typically extracted from the Comfrey plant. It is a type of protein that has some properties similar to hormones. Allantoin is found in several cosmetic products and has been demonstrated to help skin cells repair and heal after wounds, etc. It has been suggested that Allantoin may help plant cells to repair themselves while using less energy and may play a role similar to urease in nitrogen synthesis by the plant.

There are many different chains of amino acids, some have been shown to influence plant development directly or indirectly. One of the most notable abilities of some amino acids is to chelate or complex nutrients for plant absorption and/or transport. Some amino-acids also act as pre-cursors and bio-regulators of other compounds within the plant, thus influencing development.

Arguably the most widely marketed additive for nutrient solutions are the B vitamins, more particularly vitamin B-1. It most often is supplied in the form of Thiamine Hydrochloride, which is available in dry or liquid compositions. Most organic growing associations do not recognize B-1 as an acceptable amendment. Many studies suggest that by supplying plants with B-1 during times of stress (cuttings, transplant, etc) the plant will have a positive response. It is also true that plants are capable of producing and transporting their own B vitamins during times of stress, but require “sub-micro” elements such as Cobalt in order to do so. It’s kind of like your body’s ability to produce natural pain-killers (jogger’s high); but your body must use certain minerals to do so. In healthy plants, roots get most, if not all of the vitamins they need from their leaves. There are countless brands of B-1 supplements for the grower to choose from. Most contain several compounds, as opposed to simply containing vitamin B-1 only. Often a small quantity of trace elements are supplied whether by additions of fertilizer salts or resulting from organic carriers in the solution such as seaweed extracts. The carriers themselves can have a strong influence on the plant. For example, seaweed extracts may contain significant quantities of cytokinin (associated with cell division). It is important to note that sometimes the B-1 from your choice in supplements will be beneficial in a particular stage of development, while a portion of the other ingredients may impede specific types of plant development. For example, un-rooted cuttings may take longer to develop roots when supplied with elevated levels of cytokinin (naturally occurring in kelp extracts). Elevated cytokinin levels will force the plant to put energy into shoot growth, rather than concentrate available energy into producing a root system. However, the B-1 is thought to be helping to reduce stress during the cloning process. Essentially, the cytokinin may suppress the effects of rooting hormones such as NAA because auxin is used to form roots and is typically produced more by the growing point, while cytokinin is usually produced more by the roots to fuel stem cell division).

are a subject requiring an article of their own. This category refers to living microorganisms that can improve growing results or provide a means of control including pest management. Rhizobium, mychorhizae, and trichoderma are a few that come to mind. One of the obstacles in using biologicals is that they require a higher level of understanding by the grower, as they are a living organism with specific requirements for optimal performance and survival. Also having a shelf life, they are subject to damage from heat, light, cold, etc associated with transport and storage.

is the most abundant naturally occurring polysaccharide (sugar) containing Nitrogen commonly found on the earth. It is typically extracted from the shells of insects and sea creatures where it is naturally occurring. Chitinase is isolated from chitin and has been shown to provide some level of control with fungal diseases such as powdery and downy mildew. It may also act as an antagonist to root nematodes.

is a hormone commonly found in significant quantities in kelp or seaweed based products, naturally occurring or otherwise. Amazingly, there are over 200 different forms of cytokinin. Cytokinins can increase the rate of cell division, and are commonly utilized to fuel vegetative growth as they also play a role in maintaining a plant’s “youth”. Several studies suggest that cytokinins suppress the actions of auxins, naturally occurring or supplied as NAA or IBA, thus retarding rooting. However, after roots have developed, an application of cytokinin will increase branching by inhibiting auxin which contributes to apical dominance.

are highly bio-active, lightweight molecular chains resulting from the decomposition of organic matter. Basically, as organic matter decomposes it produces humus. As a result, humic acids are produced. The most active fraction of humic acids are fulvic acids. Fulvic acids are most associated with the transport of nutrients in the plant. They are a highly effective bio-chelate, in that they have the ability to make nutrients more available to the plant. Fulvic acids, unlike many other additives are not-synthetic. In fact, some manufacturers are anticipating their fulvic acid products to be certified by the organic producers associations. In my opinion, premium grade fulvic acid is probably one of the most all round beneficial supplements growers can provide their crops with due to a multitude of well documented benefits.

The giberellins we use commercially are synthesized by the fungus Giberella. Apparently there are over 100 forms of gibberellic in existence, and 73 of these occur naturally in plants. Giberellic acid (GA) is used to break dormancy and transport stored nutrients in seeds, promote male flowers in dioecious female plants, elongate cells (“stretching”), and can stimulate an increase in fruit size. When applied during a period of stress for the plant, it can help to function against abscisic acid (associated with leaf drop and photosynthetic regulation via stomata).
Humic Acids

are a broad category of organic acids resulting from the decomposition of organic matter into humus. Humic acid has the ability to improve the water and nutrient transport capabilities of many growing mediums. The primary difference between humic acids and fulvic acids is that the heavier-weighted humic acids are associated more with the transport of water and nutrients in the soil, while fulvic acids are more closely associated with the transport of nutrients within the plant; a question of feeding the plant or the soil.

is probably the most commonly found hormone in root stimulants and transplant solutions. Auxin is naturally produced in the actively growing tips of plant shoots and has a positive influence on root development. Among other properties it also plays a role in cell elongation and expansion (the “swelling” of cells). Auxin helps a plant maintain apical dominance; less branching resulting in single stems. Always follow the instructions to the letter when using products containing hormones, as they are potentially mutanegenic to mammals such as our selves.

Malic acid and citric acid are the primary organic acids found in fruits such as tomatoes. It also occurs naturally in the heartwood of some trees. Malic acid plays a strong role in the resulting flavour and sugar content of many fruits. It also plays a role in the transport and storage of carbon from CO2 as a result of photosynthesis. Research has shown that some plants are able to protect their roots in acid soils by secreting malic acid.

exhibits properties similar to IBA, but some studies suggest that NAA is more effective in producing lateral root initiation in tomato seedling roots. Both auxins have long been believed to suppress the growth of lateral branches (side branches; aka “satellites”). Cytokinins are capable of suppressing auxin, often resulting in bushier plants.

is among the 13 or so vitamins (including B-1) that are required by the plant for basic metabolic processes such as transpiration and cell division. Some nutrients such as Molybdenum are required for enzymatic reactions, and when deficient will limit the production of vitamins such as nicotinic acid (niacin) therebye creating a limiting factor for the rate at which a plant may develop. By supplementing your plants with vitamins, it is possible that you can help your plant create the reserves of vitamins required when adverse growing conditions would not allow the plant to do so otherwise.

is a more recent discovery with regards to increasing yields in a variety of crops. It exists naturally in several types of plant and insect waxes as a type of alcohol, and in some instances is extracted directly from plants in a crystalline form. In a recent study it was applied as a spray (X 0.005 ppm) for three applications at 5 day intervals fifteen days after transplant into a hydroponic system with perlite as the medium. The tomatoes treated with the triacontanol yielded 20% more than the control group (un-treated). Much experimentation still needs to be completed before the full spectrum of effects from this relatively new additive can be documented. 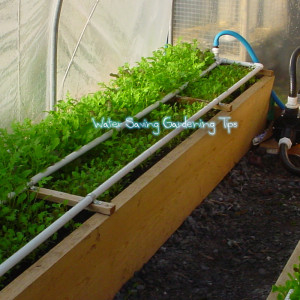 Water Saving Gardening Tips Water is a precious commodity on the planet. While most of the earth's surface is covered...