When it comes to crop lighting, whether for gardening indoors or for use as supplemental greenhouse lighting systems, the term “game changer” gets thrown around a lot—really making it more of a badge of “same thing, different package” in a lot of instances. That’s unfortunate in respects, because we can’t think of another way to describe this highly innovative double ended HPS grow lamp lighting system.

To get right down to brass tacks, what’s different about this Double Ended HPS System by RevolutionMicro is that it’s the first and only Double Ended grow light that is driven at Low Frequencies. There’s more than that too; but let’s start there 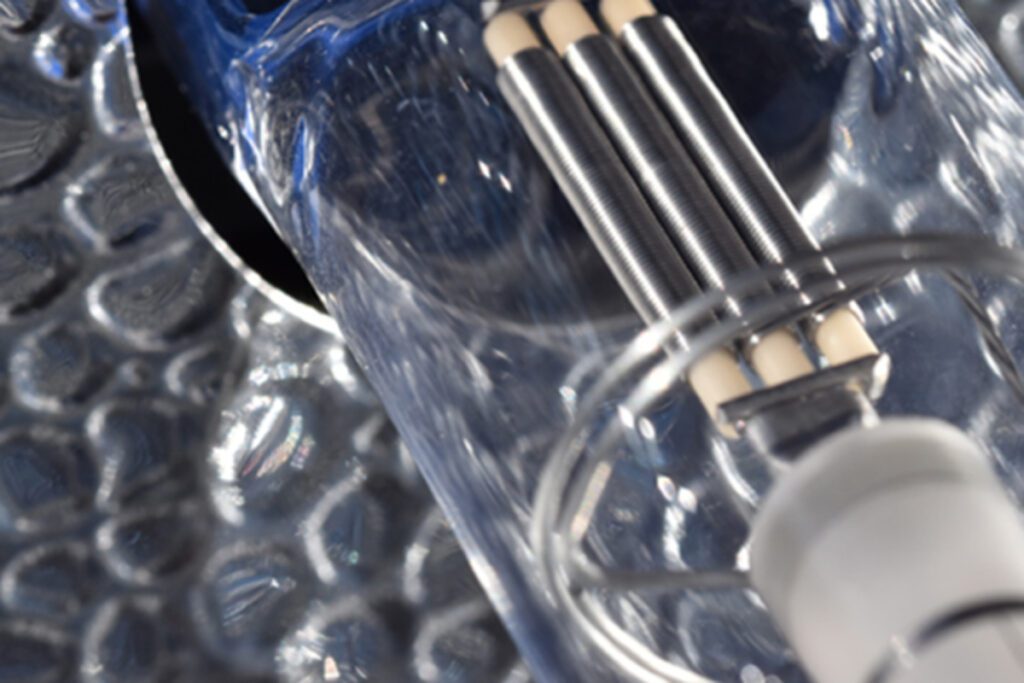 As a Grozine follower you may recall Rev Micro’s innovative work in addressing the issue of EMI that had been creating problems for growers and the people that live near them. At the root of the issue of course, was the High Frequencies being generated by and escaping poorly shielded Electronic HID (high intensity discharge) Ballasts.

If you studied up on DE technology for your garden (if you didn’t, Click HERE), you learned that DE HPS grow lamps have historically been driven at very high electrical frequencies—literally thousands of times higher than your electrical supply is or that common electronics operate on. 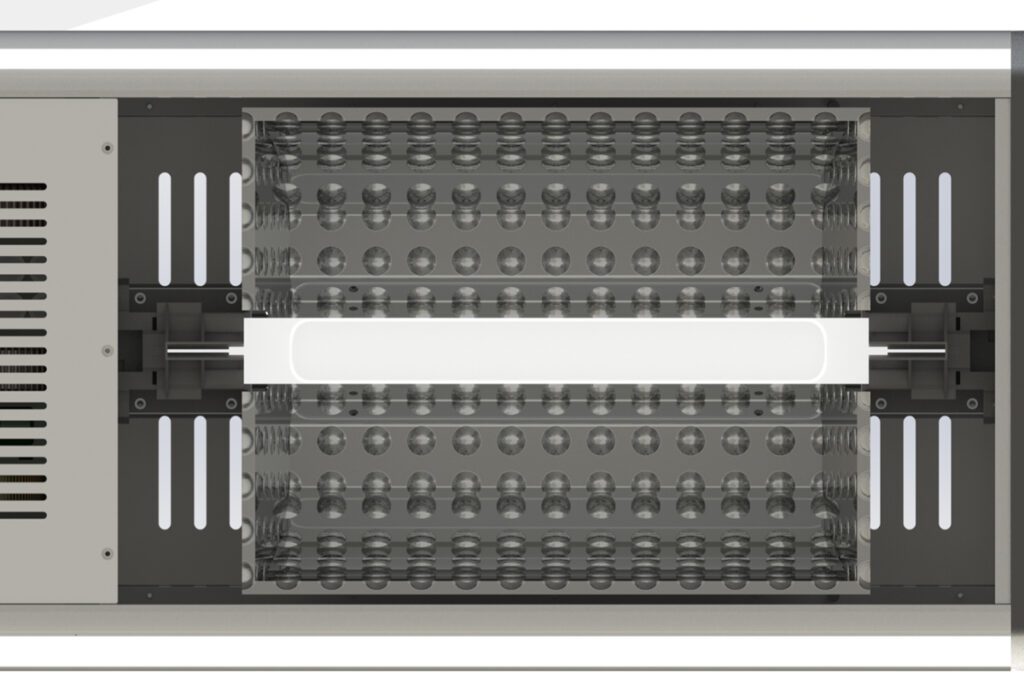 Let’s start by saying that according to RevMicro’s testing, NOTHING in the Double Ended (DE) world of grow lights produced more plant usable light per watt of electrical consumption than the DEva DE HPS Grow Lighting System.

The Deva HPS Grow Lighting System works completely different from the rest, making it a true game changer. It also has some smart thinking in other areas too.

Firstly, at the heart of the Deva system is Silent Squarewave Technology.

Only Greg Richter of RevMicro could think of taking a High Frequency based technology down from operating at 100,000+ Hz and dropping it down to 100 Hz—and make it produce even more light—and safely, in the process.

That’s not a type-o, Silent Squarewave produces a perfect bandwidth for HID lighting technologies at 100 Hz (for reference you line voltage is usually 50-60 Hz).

The 100 Hz output (vs conventional 100,000+) helps to eliminate or cut down drastically on problems like EMI and the lesser known issue of Harmonic Distortion that may occur in some types of HID lamps.

A square sinewave produces a predictable rise and fall in the “shape” of the electrical output, rather than a wild and unpredictable wavelength—this is directly reflected in the quality of the light that can be produced in your grow lamp, based on the quality and type of electrical output from your ballasts in many types of HID lamps. Plants “see” the difference in many instances, and respond favorably. It may also promote longer lamp life and less risk of failures also. 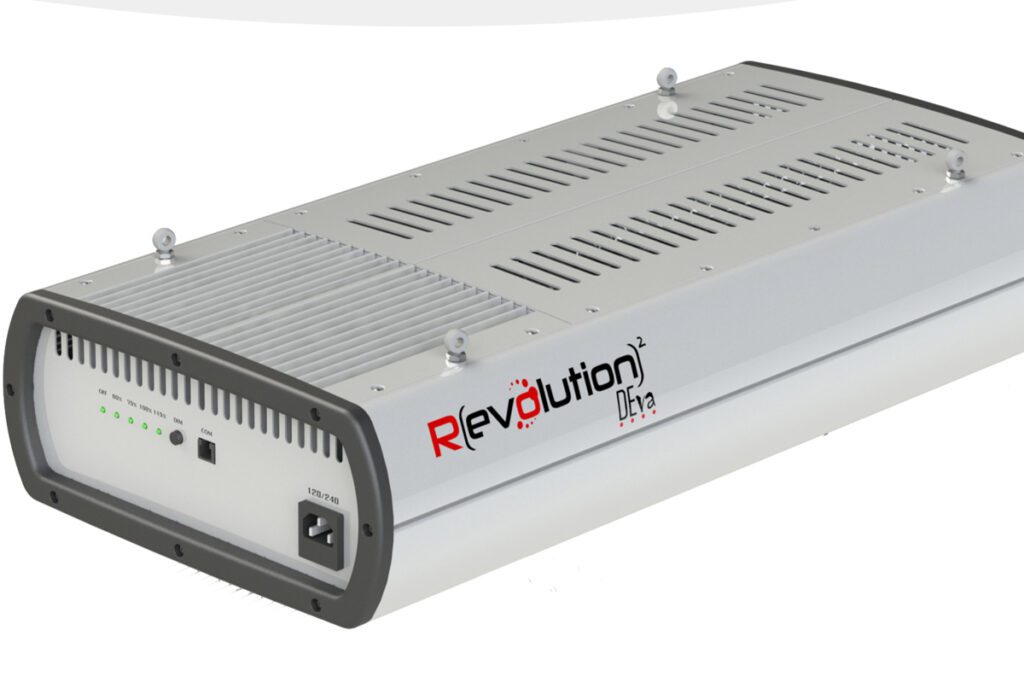 What Else is Different with the DEVa HPS Grow Lighting System?

· Only the very best components used in construction; often air craft grade creating a safer and more reliable DE grow lighting system versus what’s presently available. For example the avionics grade capacitors are rated for 36 years of continuous use, while other makes may only last a few years.

· Designed by Real for Growers FOR Real Growers

We at Grozine are excited to trial this exciting new technology, so stay tuned for more Grow Trials and real world Hydro GEAR testing reviews with the DEva.

In the meanwhile, we were fortunate to catch up with a very busy and productive Greg Richter, hard at work in Rev Micro’s Thailand based manufacturing facility (click HERE to learn more about that)

GZ: Greg, you know we’re big fans of your innovative work for growers. We had some hints that this was coming. And now that the DEva is here, can you tell us a little bit about what inspired you to revolutionize the way growers can operate DE grow lamps versus all the other ones that are operating at ultra-high frequencies?

DE lights work beautifully, which is why growers love them. The ballasts that drive them, though, are just plain primitive. High frequency, high temperatures, and mostly all copies of one design. We knew there had to be a better way to do this and, as with most truly disruptive designs, it pushes performance way up and price down at the same time. DEva is very, very different like a Tesla S is different from a BMW — better in every measurable way, and not at all alike under the hood. If the Tesla was cheaper than the BMW, like the DEva is compared to other DE lights, BMW would have a “reason for existing” problem.

GZ–You have indicated that in your testing, the DEva with Ushio is producing the most usable plant light per watt of power used—tell us more about this testing, and who you may have tested against?

We tested against all the major names, and a few up-and-coming Chinese copies. They’re all pretty similar, but the Ushio has the best color, the highest efficiency and is beautifully made in Germany. More PAR per dollar’s worth of power, and less output deterioration. It’s a great lamp, I wish I’d made it, and I wish it cost less than it does. Worth it, though, and one comes in every DEva light. I’ve got test reports, if you want ’em?

GZ–The RLC-1 Ballast Controller—for real, it can do all of that? Mind telling us more about this?

The RLC1 is smart, simple to use, and just about bullet-proof. Market-wise, we’re up against analog technology with all-digital RS-485, the same thing you use for control in a refinery or power plant. No dropouts, no complicated wiring, and we can both send and receive data to monitor light performance, not just be a Dimmer switch with a display. This isn’t a big deal, it’s the real deal — two rooms with independent timers, sunrise and sunset ramps, automatic dimming with temperature, auto shutdown, and intelligent restart means no waiting for the lamps to cool when the power’s been off for an hour. 512 DEva lights on one controller, when everyone else is shooting for 75 or 80 with analog streetlight controls. We’ve really moved the bar, you know?

Current Culture CCH2O, World Wide Water Culture Most of our fans appreciate the potential for food production that hydroponic...