Misrepresentation in the Hydroponics Marketplace?

[quote]we found some glaring differences over the image being portrayed versus what is proving to be reality based on the information we have available.[/quote]

According to Brand Finance, Ferrari is the world’s most powerful brand.  You say “this is The Ferrari” when referring to a class of products and people naturally know you mean “Best”.

Naturally, a powerful brand name is built on things like drive, success, innovation and most of all having a great product or service.  Typically the biggest brands provide themselves on being innovators, thinking outside of the box….in short, “doing it better”.

Would Ferrari hold the recognition they do today if they built super amped exotic four wheeled beauties and dropped Chinese Motors and Drive Trains into their masterfully sculpted cars? This seems highly unlikely, although more of us might be driving them if they priced them accordingly to such a change in manufacturing standards and procedures.

However, if they kept the prices as they were “Made in Italy” and didn’t reveal that the Motors and Drive Trains were from China most of us would call that misleading, others may simply call that fraud—especially if that’s what has been stamped onto the Customs Documentation as place of manufacture or vehicle identification tagging.

Obviously Ferrari has never done that and likely never will, remaining a rock solid icon. So why would we even mention that? 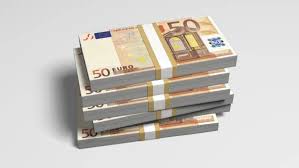 What if the hypothetical situation used with the world most recognizable Sports Car was a reality in the hydroponic marketplace with some of the cultivation equipment you may have bought and use to grow your crops?

Some people may not really care—so long as the equipment works as promised.  Others may feel they have paid too much because of the perceived value of where or how they think their gear was made.  What if the crop lighting “engine and drive train” rolled out of a Chinese factory as a cookie cutter copy of another brand and got dropped into a box stamped “Made in Holland”  after forwarded to The Netherlands before shipping out to North America? 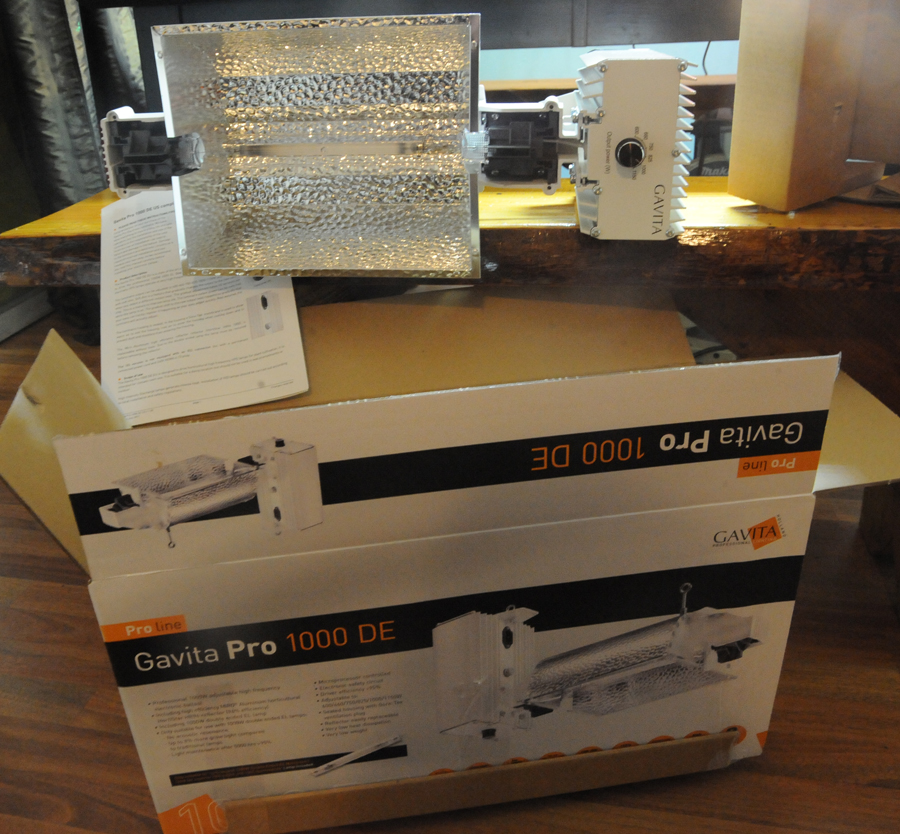 Above: Gavita Gear: Great Performance, Great Packaging–but  Priced as “Made in Holland”? 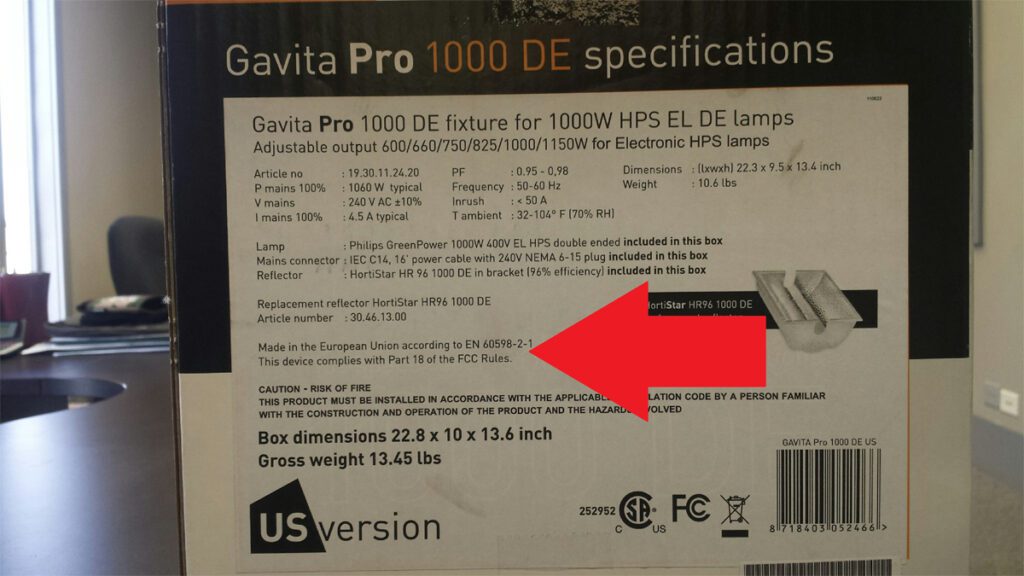 Above: Carton clearly states “Made in European Union” 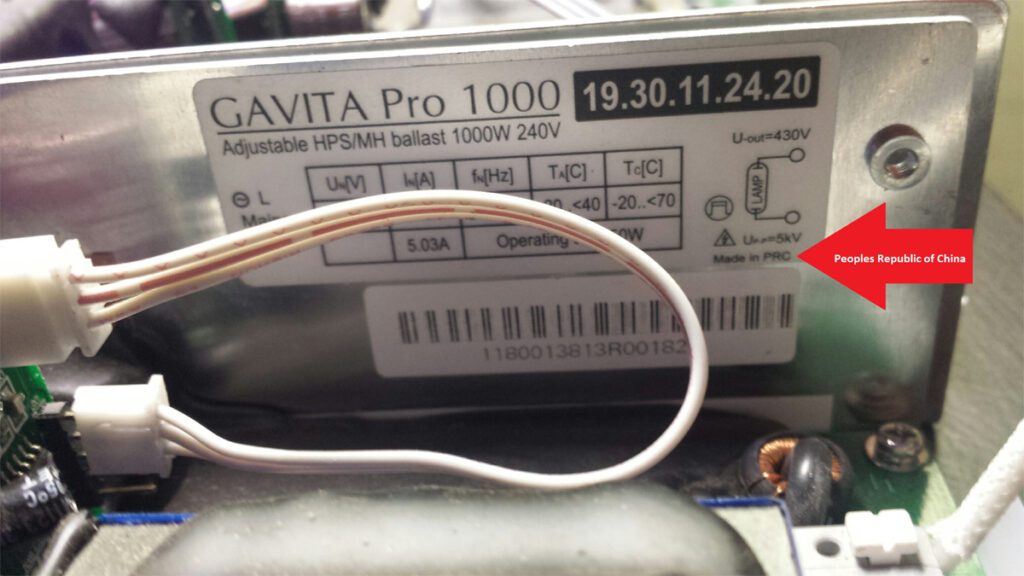 We at Grozine recently received what may be referred to as a “White Paper” from a source that prefers to remain anonymous at this time.  What we read seemed very serious to us here: a top selling manufacturer in the hydroponics industry claiming to be Produced in Holland, marketed as innovators, top dogs, etc were simply repacking a Chinese made ballast that is a direct copy from another manufacturer. 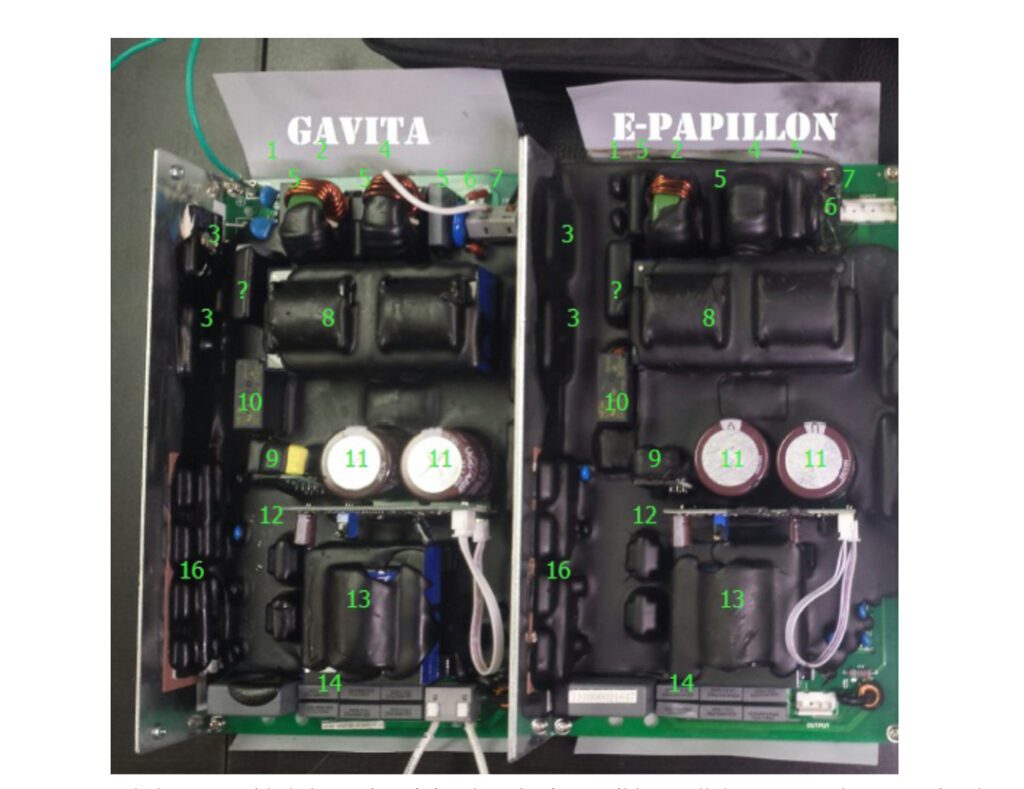 Above: These two ballasts look the exact same to us, noting E-Papillion is Philips, a well recognized innovator in lighting

The White Paper (Where It’s Made and What It Is-Lies, Damn Lies and Gavita), Available |HERE | as a PDF 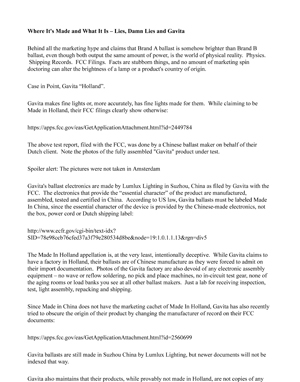 UPDATE: December 12, 2015 , Since Publication (12/10/15) we received an updated and more detailed version of the original white paper we shared, you can download it | HERE |

Anonymous accusations don’t typically hold much weight, however we researched the source information provided us, as you can too from the links below.

TIP: To save yourself the valuable time, here is the |TEST REPORT | that is Public Record on the Federal Communications Equipment website. 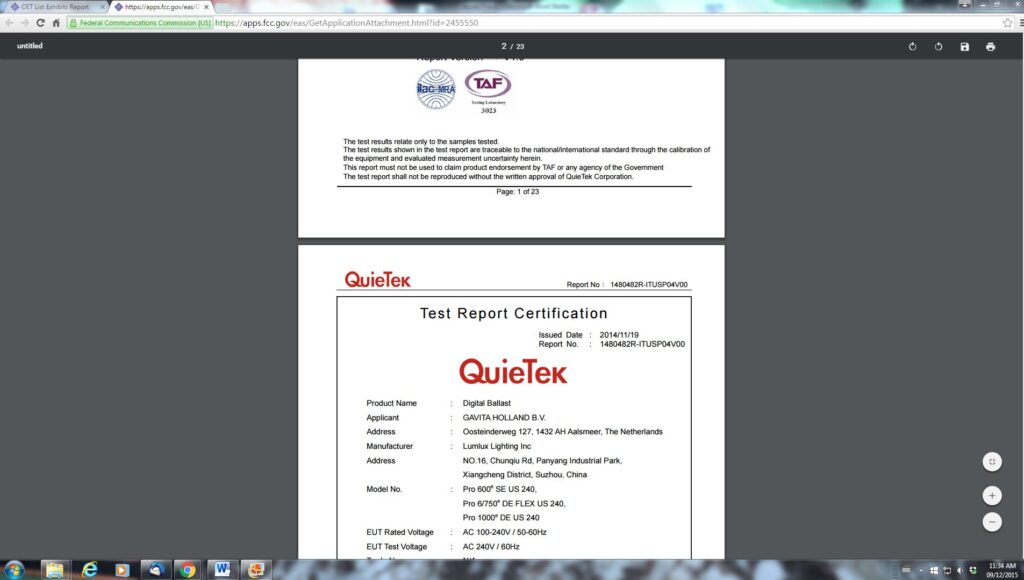 What you’ll see (same as we did) is that Lumlux Lighting (China) is listed as the actual manufacture, NOT Gavita—the rest of the reports (after the first two listed if you click “Details”) available do not indicate this; according to the White Paper they cover their tracks after the first two product submissions to the FCC.

After seeing the reports as filed with the FCC we realized this warranted further journalistic investigation.

Gavita are regarded as one of the premiere crop lighting fixtures in the hydroponics industry.  We have tested their gear and think it’s pretty good—although after learning what we have, we ponder the justification for the MSRP $425.95 USD, for the Chinese made 600w).

Looking at Gavita Holland’s website in the About section we find this:

Many sections in the White Paper suggest strongly to the contrary from the statement we have quoted from the site.

Grozine also found online articles and internet chats where Gavita representatives allude to all of the Research and Development they do, the “factory” they build from in Holland and generally carry on like they invented the gear they sell. Made in Holland (that’s what is printed on all of the cartons we have seen to date—we invite you to check yours).

Looking at the |White Paper|, the Company’s own website, internet chats participated in by Gavita Representatives and printed articles we found some glaring differences over the image being portrayed versus what is proving to be reality based on the information we have available.

In the interest of objective journalism, we decided to contact Gavita to see if they would grant us an interview and offer them a chance to comment on our findings.

Long story short, they declined to be interviewed and give comments or statements for the article after revealing the context of the article was Misrepresentation in the Hydroponics Industry. During our discussions they aimed some thinly veiled threats (non-physical nature) at us regarding this article.

Finally, Gavita representation stated that they would only offer a written response once we disclosed our information and documentation to them.

Respectfully, we were disinclined to accept any written prepared statements from Gavita on this matter—for reasons that should appear obvious, we hope.

It seems highly probable will be plenty said on the hydroponic chat boards.

Hint: look for over complication of terms and vast quantities of text to bury simple and poignant truths.

Our goal is simply to inform you.

Since our communications with Gavita in hopes of an interview and further research, we noticed several internet chats occurring on popular platforms for growers have been removed or deleted where company representatives were actively engaged in discussing all of the “R&D they do from their Factory in Holland”

Is This a Widespread Industry Issue?

Thankfully not.  “Buyer Beware” can apply to just about anything in life. Most companies in the Hydroponics Industry deliver what they promise—occasionally there have been other incidences of misrepresentations in the industry. One of the oldest we are aware of is a company simply buffing the names off grow lamps and painting their own overtop—this is an exception in the business not the rule.

Recently, a big box store (Home Depot) appears to have suffered some hardship as a result of less than diligent product representation and standards from growing equipment manufacturers.  The grow lighting equipment they may be selling at some locations (in all likelihood originating for a Hydroponic Industry Manufacture) could be landing them in hot water. As can be read in the following expert:

In its letter, the League noted that it has received numerous complaints from the Amateur Radio community of “significant noise” in the bands between 1.8 and 30 MHz from so-called “grow light” ballasts and other RF lighting devices regulated under FCC Part 18 rules. Gruber said emissions from grow light ballasts were measured in the ARRL Lab to be way above both non-consumer and consumer Part 18 emissions limits.

Although otherwise legal non-consumer rated ballasts — the subject of ARRL’s complaint — are not nearly as problematic as grow lights, they can still cause interference beyond what would normally be expected or easily addressed in a residential environment. The devices at issue in the League’s complaint are only legal in commercial and industrial environments, and should not be used for residential purposes due to the higher Part 18 emission limits permitted for industrial and commercial devices.”

What Do We Hope to Accomplish?

Let it be known that there are people with a level of integrity in the Hydroponics Industry who will not sit quietly in face of deception and extreme instances, fraud.  You work hard as a grower for your money—we at Grozine know this.  We hope to continue to help bring facts to the forefront, so growers can make informed decisions as to where their hard earned money goes.  Will the next ballast you buy from a company be better than it was before because they used some of your money to make it better—we hope so; that’s the way it should be in our estimation of things-not something designed to squeeze another dime of profit from you by way of cut corners on safety, quality or integrity.