Hydroponic Hypochlorous Acid Applications, Worth It? 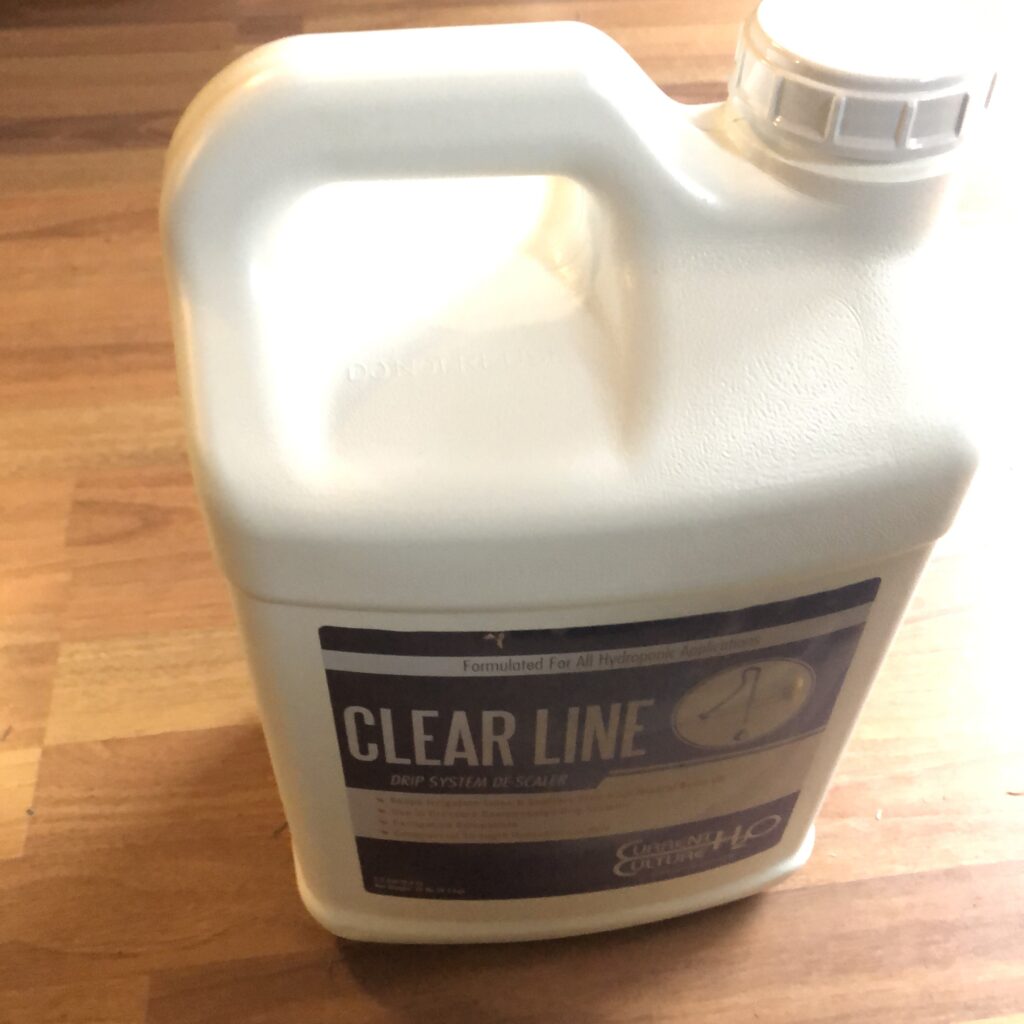 Firstly, what is hypochlorous acid and how can it be of benefit in hydroponics growing applications?

Hypochlorous Acid (HOCl-) is a form of Chloride that when used as directed is perfectly safe for people, animals and plants.

A level of 300-400mV (millivolts on ORP meter) is considered optimal for growing crops.  For contrast, treated tap water for human consumption is typically around 650+mV–which is often accomplished with the addition of chlorine to water supplies.

Please note that the type of chlorine added to water supplies verus Hypochlorous Acid has profoundly different effects on plants–the chlorine that occurs in tap water supplies is not usually helpful to crops and is even detrimental, ie why water sources used for hydroponics are typically filtered first.

Did you know that Chloride (Chlorine) ranks as number twelve in the most abundant element in the human body? Typically, we get most of our chlorine from table salt, which is Sodium Chloride (NaCl-). White blood cells, responsible for healing and fighting off problems, produce Hypochlorous Acid in our bodies and is considered a natural part of our immune system. Chloride is also a necessary element for healthy plant growth, although in low amounts.

Hydroponic Hypochlorous Acid applications don’t deliver chloride to plants, so there is no risk of chloride toxicity to crops.  However, at extremely high levels which create very high ORP levels (>450mV)  there can be damage to plant tissue, for example roots or foliage.  When used as directed, hydroponic hypochlorous acid applications are very safe to both people and plants while being very beneficial because optimal ORP levels make it very tough for common plant pathogens found in water like pythium, rhizoctonia, fusarium to survive, propagate or proliferate.

It is also worth noting that besides keeping funk away in the rootzone, a lot of growers report fewer fungal or bacteria related issues with the aerial zone (green portion, ie leaves, shoots, flowers, fruits) when crops are receiving supplemental ORP boosts in the rootzone with hypochlorous acid. One hypothesis might be that plants have stronger immunity up top because they do not expend as much energy fighting infections down below–a phenomenon worthy of some additional study.

Let’s get down to it then, shall we? As you guessed, Clear Line is a hydroponic nutrient additive that contains hypochlorous acid–around 0.15% by weight or around 1500 ppm. While this may sound mild, the formulation is highly potent, with a recommended dosage rate of 0.25 to 1 ml of Clear Line to be added per gallon of water or nutrient solution.

So, if adding 0.5ml of Clear Line per US gallon (3.785L), you are effectively adding about 0.2 ppm (parts per million) of hypochlorous acid.  In real terms, this should typically elevate your water or nutrient solution to near optimal ORP levels.  If your water or hydroponic system is prone to microorganisms or harboring pathogens, the levels will drop back out of the optimal range faster–because the oxidation reduction potential is getting used up neutralizing unwanted pathogens, bacteria, etc.

In RDWC (recirculating deep water culture) hydroponic systems, Clear Line can be added daily, following the manufacturers recommendations for dosage rates. Good ORP meters aren’t cheap, but if you are serious about protecting your valued crops they are a worthwhile investment.  Besides helping you to determine how much HOCl- to add and how often, they can be a good diagnostic tool for monitoring crops.  If there are fast and sharp drops in ORP based on daily readings, that is a strong indicator that there is a heavy load of disease causing microorganisms present in the system.

Clear Line is also ideal for drip irrigation systems and can be added via dosing systems with each irrigation.

Besides protecting plants from pathogens, Hypochlorous Acid also acts as a descaler (reducing salt build up) and helps to eliminate or reduce biofilms from occurring in fertigation systems, including reservoirs, piping, drip table surfaces, etc.  Biofilms can lend way to creating disease causing organism populations that infect crops.  A professional irrigation system is a significant investment in both materials and labor and is therefore worth protecting–once overrun or “mucked up” necessary replacements can be costly, or even devastating in the case of serious crop infections.

How Did Clear Line Work?

We tested Clear Line (supplied by CCH2O.com) in both RDWC system and drain to waste drip table applications–and for what turned out to be the hottest period on record in our geographic location ever (Canadian Pacific NorthWest, Summer 2021). We probably couldn’t have designed a more strenuous test. 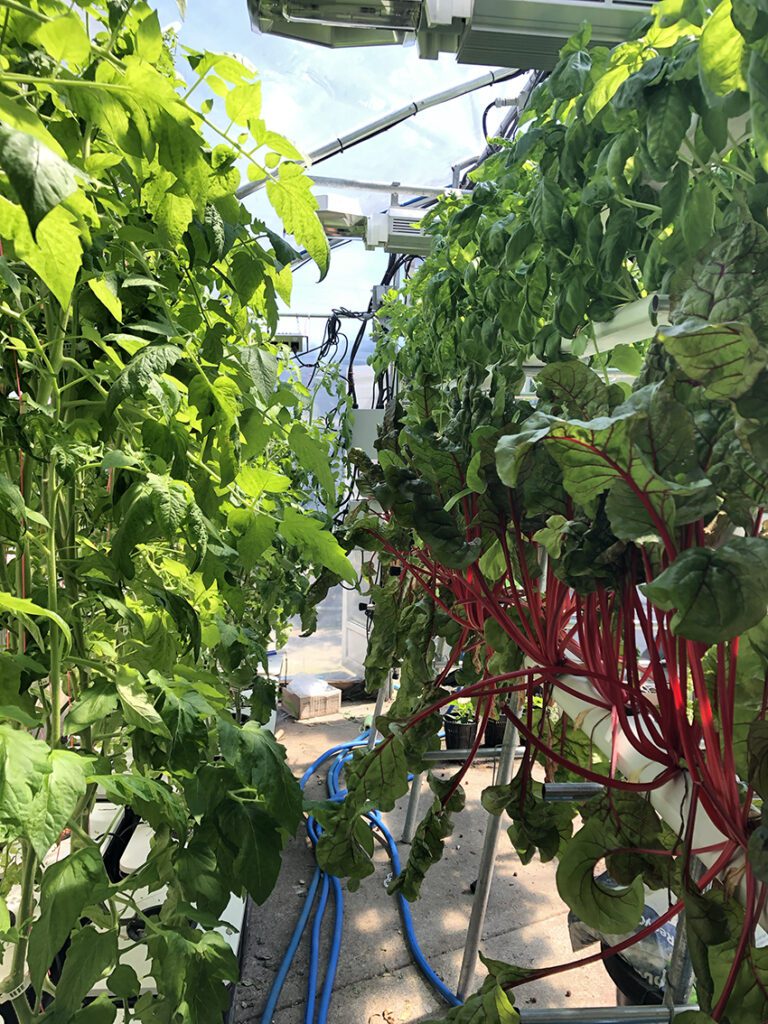 Spoiler Alert: we started using Clear Line in Spring 2021 and to date, we haven’t stopped using it since!

Following the recommended dosage rates for each type of system, we could see differences within two weeks after beginning applications to existing systems.  There was a significant reduction in the occurrence of biofilms on surfaces like the inside of reservoirs, drip tables, growing media (ie grow rocks, rockwool)  and even on roots in some instances.  With less bio matter on surfaces we quickly saw a reduction in fungus gnat populations too, which seem to thrive in the presence of algae which was all but eliminated following only two weeks of regular applications. 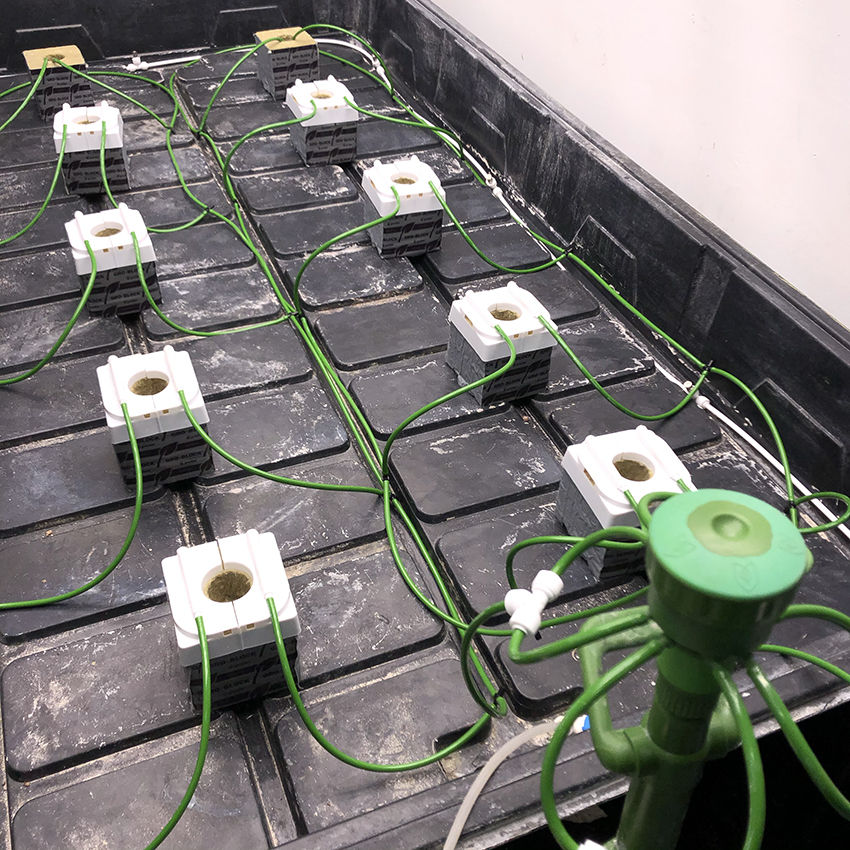 After harvesting crops, there was noticeably less scrubbing required to get hydroponic systems ready to replant, ie a thin salty film versus salt and biofilm crusted areas on surfaces that are tedious to remove completely. In fact, we were able to adopt a higher level of CIP (clean in place) practices, which is a huge time saver that allowed the same system to be planted on the same day it was harvested from–no down time, and the extra sets of hands were already there. 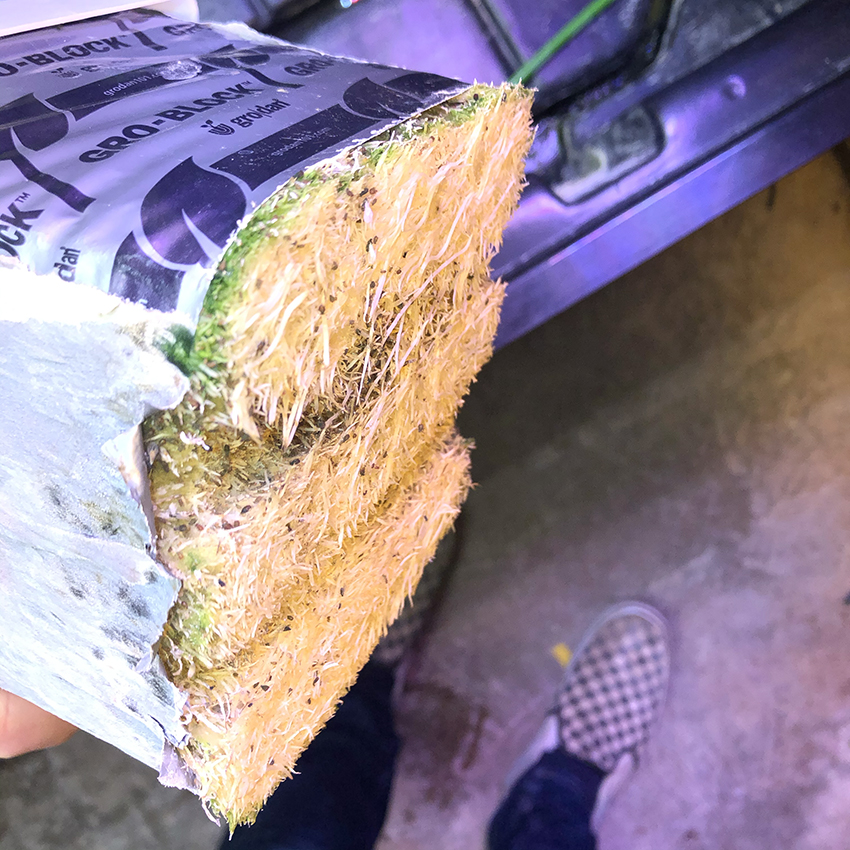 Conclusion: Clear Line hypochlorous acid applications show benefits fast and in a wide variety of areas in a typical hydroponic growing set up.

TIP: Hypochlorous Acid is widely used in the food handling industry because it is so safe, effective and economical to apply.

In drip tables using lines and plumbing running from a central reservoir with zonal controls the inside of new tubing remained spotless, even after full growing cycles.  Older tubing had a significant reduction in biofilms, and very quickly. For a brief period of just a week we did not run Clear Line and we quickly began to see biofilms occurring where they had not before.  Once added again, a steady reduction quickly followed.

Conclusion: Clear Line is highly effective at eliminating or preventing biofilm build up in irrigation systems

Application Tip: Clear Line is added as a final step before fertigation water (after nutrients added) enters the irrigation manifold system in drip table applications, a proportioner system (dosatron) set at 1:100 adds Clear Line from a stock solution.  The stock solution is prepared by adding 8.5 fluid ounces of Clear Line to 2.5 US Gallons of filtered water

Root systems also benefited from regular additions of Clear Line.  In the greenhouse Under Current RDWC Systems growing tomatoes and a variety of heirloom chilies, no reservoir chiller was used.  As mentioned it was the hottest summer on record here.  Naturally, the root zone temperature would rise under intense solar radiation, with nutrient solution temperatures reaching up to 85 degree Fahrenheit during peak daylight hours, at night the temperature would lower slightly.  This trend lasted for months. 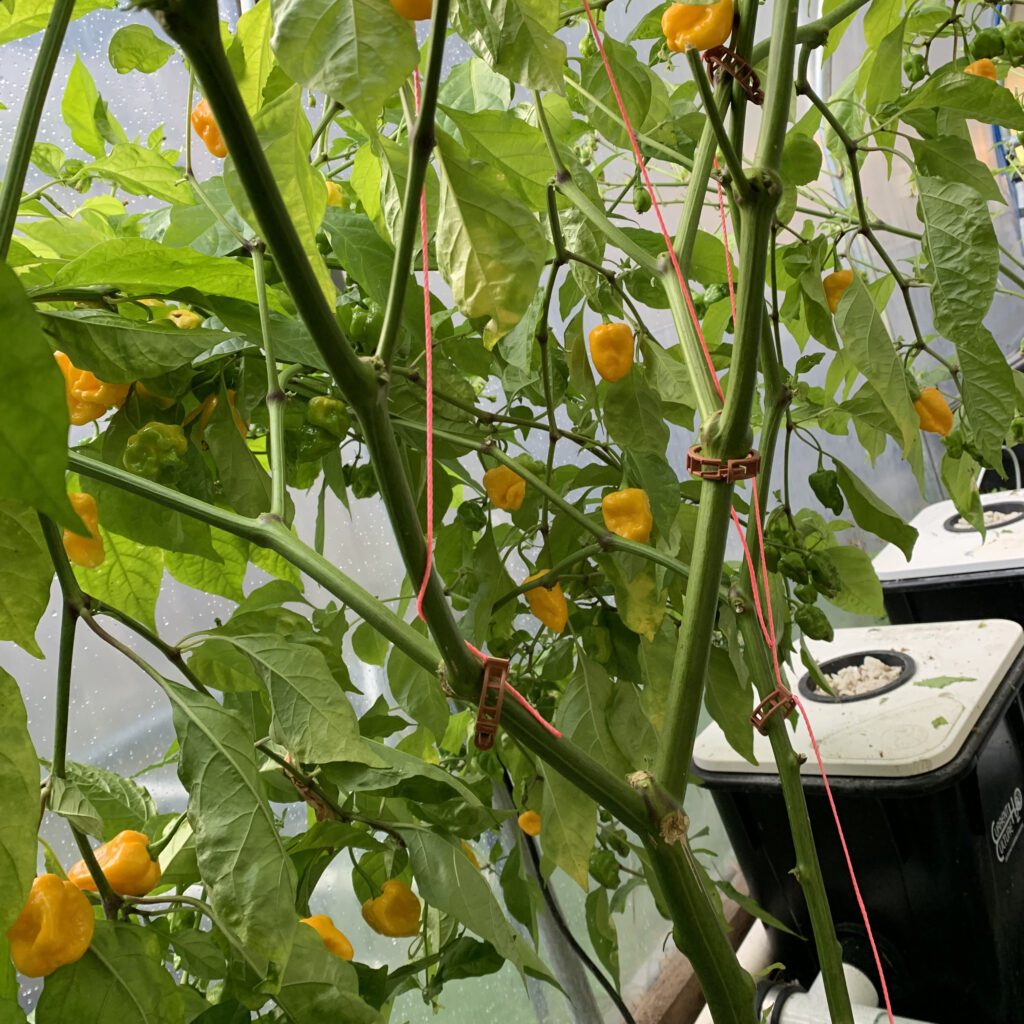 While fully expecting to encounter root troubles in water culture while operating at temperatures exceedingly past the optimal ranges, we and the crop did not.  In fact, it has turned out to be one of the best seasons we have experienced in our set up. 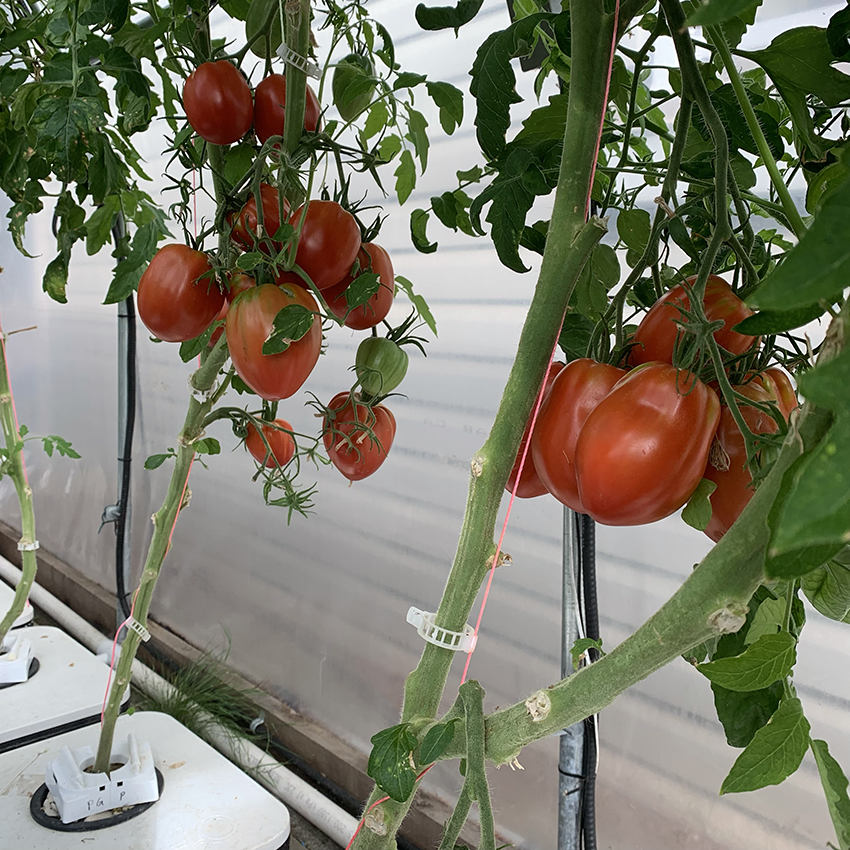 Adding Clear Line was performed manually or using an Add-Back Kit on a daily or semi daily basis.  For approximately a two week period Clear Line was omitted and over time we began to see a gradual discoloration of crop roots, in both tomato and hot pepper systems. Fortunately we did not see any serious root pathogens develop by the time we started adding Clear Line again.  As soon as we did,in just a few days the roots began to appear shades whiter; eventually, as new roots emerged returning to a very white and healthy state (even in extreme heat)

Conclusion: Clear Line was nothing short of magic in the rootzone, even under the toughest of hydroponic growing conditions.

TIP: One of the most simple and effective ways to prevent serious troubles in hydroponic root systems is to avoid the use of products containing biologicals; strictly mineral salts, ie Cultured Solutions nutrients. Lots of aeration helps plants avoid troubles and makes nutrient uptake more efficient so the EC can be maintained at lower levels, putting less stress on crops.

Can Hypochlorous Acid Be Over Applied in Hydroponics?

Yes.  When testing the upper limits we noted some slight tanning of roots, indicative of too strong an ORP level due to HOCl- applications.  Not long after we backed off levels, roots resumed healthy white appearance, particularly in new growth.  We do not recommend adding Clear Line in conjunction with other oxidative products, for example hydrogen peroxide based solutions–even when using an ORP meter.

Clear Line is a winner.  If you grow in hydroponics, we cannot think of a reason you should not be adding it. It is a highly effective, concentrated and economical addition to any hydroponic application.  Strong statement, yes.  However, it does not take long at all to experience visible and measurable differences in:

Additional Notes: no significant increase on EC or change in pH is detected when adding ClearLine to nutrient solutions, reservoirs, systems, etc. 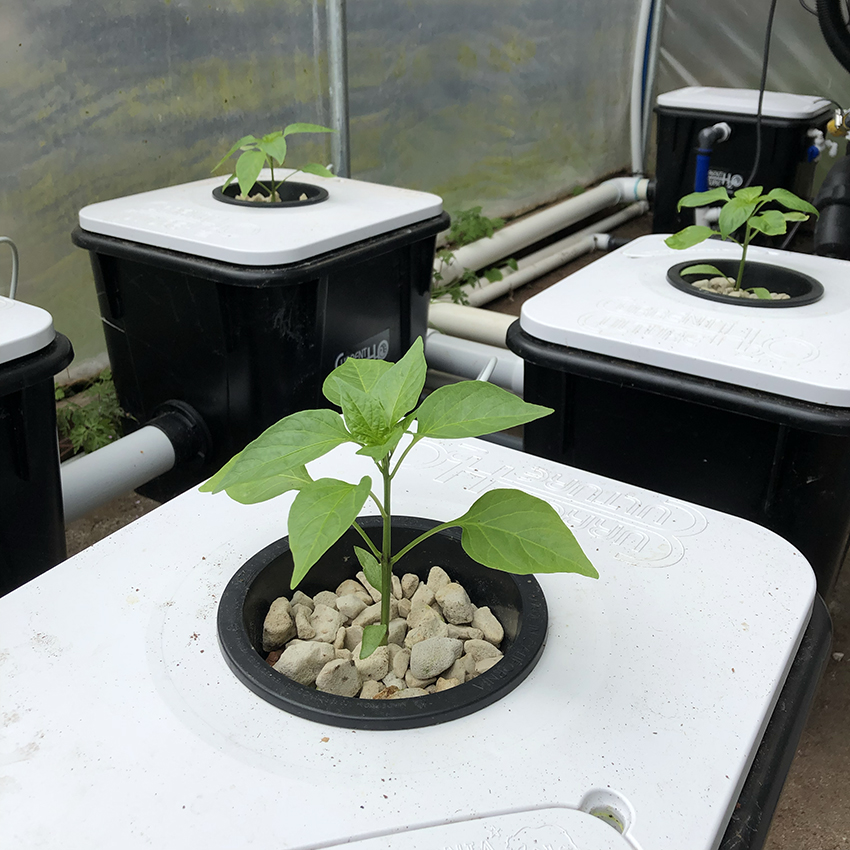