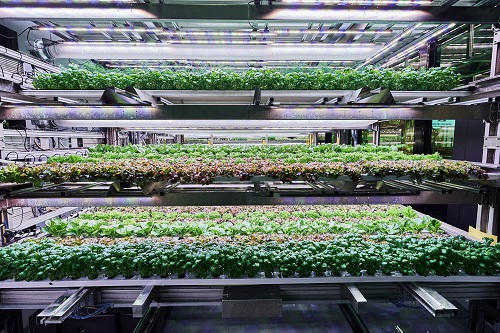 One of SweGreen’s eight vertical farm units that it operates across Sweden. Credit: SweGreen

How does the world feed its ever-increasing, evermore urbanised population in a sustainable way? This is the question vertical farming aims to answer. In vertical farms, plants are grown in vertically stacked layers as opposed to horizontal rows, fields are replaced by abandoned indoor spaces, a hydroponic fluid medium usually takes the role of soil and rain, and LED lights do the job of the sun.

Farming in this way has many advantages. The most obvious is a much smaller footprint. Done well, vertical farms can increase yield by over ten times per acre compared to traditional farms. When placed in prime urban or semi-urban locations, they also reduce average food miles from around 1,500 miles for a traditional farm to just 43 miles for a vertical one. What’s more, their controlled indoor growing environment means vertical farms are not plagued by pests and are naturally resistant to unfavourable weather – an increasing problem as the effects of climate change become more apparent. And they are not bound to the seasonal and diurnal cycles either, meaning they are productive 24/7, 365 days a year.

“About 50-70% of a vertical farm’s energy use is coming from lighting: the LEDs,” says Professor Leo Marcelis from Wageningen University, The Netherlands. “And most of the rest is for cooling, which is also indirectly related to lighting”.

Thanks to these and other benefits, the vertical farming market has rapidly grown over the last decade, with the trend set to continue at 25% CAGR for the foreseeable future and a huge range of start-ups, scale-ups and even now unicorns – US-based Bowery Farming, AeroFarms and Plenty, and German company InFarm – ploughing their own unique furrow.

So why aren’t our urban and semi-urban areas bursting with fresh produce? Aside from the fact that vertical farming is largely limited to the production of herbs, leafy greens and microgreens at the moment, the main reason is cost. Investment and personnel costs are a part of this, but the biggest cost that makes growing produce on vertical farms both economically and environmentally less sustainable than in greenhouses or on traditional farms is energy use.

“About 50-70% of a vertical farm’s energy use is coming from lighting: the LEDs,” says Professor Leo Marcelis from Wageningen University, The Netherlands. “And most of the rest is for cooling, which is also indirectly related to lighting”.

This is why researchers and companies in the space are concentrating on other ways to optimise LED lighting solutions for growing. What can have the most impact is ensuring plants make the most efficient use of the light they receive. The light spectrum, intensity and duration, and lighting position, all have direct effects on plant growth cycles and resulting produce.

Having experimented with many of these factors, Marcelis knows just how complicated it is to find the optimal lighting setup for a vertical farm. In terms of light spectrum, a large fraction of red appears to be important for growth of any plant. But a touch of blue is also key to nurture vegetation and flowering, which is why most vertical farms are bathed in a pink-purple glow. Green can also play a part in some cases, UV can change leaf colour, and far-red light – traditionally thought not to be important for photosynthesis – triggers a wide range of important processes.

Marcelis has also found that plant yield is substantially affected by light intensity and duration. Higher intensities and longer durations yield more produce, but only up to a certain limit that depends on the crop in question. Light intensity also affects produce quality and shelf life. “For instance, we have done experiments with lettuce where, in the last six days before harvest, we increased the light intensity very strongly,” he explains. “We saw that there was more sugar content and vitamin C concentration in the lettuce – important for the plant itself and in particular for the shelf life, which went from something like nine days to 13 days.”

“What most companies do is keep everything constant throughout the whole day and throughout the whole growth cycle,” continues Marcelis. “We say, they should look at the growth stage and adjust the spectrum, intensity and duration to balance all of the factors that go into producing a premium quality product.”

A company thinking along similar lines to Marcelis is Swedish start-up SweGreen. SweGreen operates eight vertical farm units (about 40-60m2) across Sweden and further afield. The company is also introducing new growing platforms with just a 5-8m2 footprint that could enable 80% of European supermarkets to offer store-grown vegetables to their customers. “Lighting is one of the tricky parts where we have done a lot of research to create a ‘recipe’ that divides into different phases of plant growth: when they’re smaller, when they’re moved from a nursery unit to our automated growing platforms; and then the last days where we’re really focused on taste adjustments and maximising biomass,” says SweGreen co-founder and Chief Innovation Officer, Sepehr Mousavi. “By implementing this recipe, combined with a smart timing and dimming strategy, we have been able to bring down our energy consumption by 20-25% per unit.”

Though the LED lighting market is saturated by a host of companies – from generalists like Signify, GE Current and Chinese firm Sanan to smaller indoor farming specialists such as UK-based Kroptek and LST, and Finnish business Valoya – opportunities abound for photonics innovators interested in expanding into vertical farming. This is because all signs point to vertical farming becoming fully autonomous in the near future. And for that, growers will need data from a raft of optical and other technologies.

At a small scale, US start-up Iron Ox has already achieved the feat. Its hydroponic farm relies on two robots, one of which picks up the trays of plants and transports them, and the other is in the form of a robotic arm, conducting fine manipulation tasks like seeding and transplanting.

But full automation is still out of reach for commercial vertical farms at present. The Netherlands is a hub for innovation towards making this a reality. For instance, the Amsterdam Institute for Advanced Metropolitan Solutions has teamed up with Wageningen University and vertical farming company Growy – as well as various innovators such as Signify and Be-bots – in the GrowX 2.0 project – which aims to build an efficient, fully robotised and AI-driven vertical farm in Amsterdam. There, the researchers are testing robots that harness AI and machine vision to plant, nurture and harvest leafy greens.

Specim’s hyperspectral camera can capture changes in leaf pigmentation or the presence of macro elements such nitrogen, phosphorus and potassium. Credit: Specim

Elsewhere, Italian start-up Agricola Moderna is at the forefront of efforts towards continuous and detailed plant monitoring; key to full automation. Their platform uses several types of sensor – RGB-D cameras for canopy 3D reconstruction and several environmental sensors that measure temperature, light intensity and CO2 levels – and sends all this information to a central database where it’s analysed and given context. Agricola Moderna is also testing the utility of hyperspectral imaging.

By recording hundreds of bands across a wide spectral bandpass simultaneously, hyperspectral imaging allows the identification of materials based on their chemical composition rather than their visible characteristics, such as size, shape or colour. “With a hyperspectral camera, we are able to capture a material’s unique spectral fingerprint,” explains Minna Törmälä from Specim, which produces the Specim FX10 hyperspectral camera Agricola Moderna chose for their studies.

Hyperspectral imaging in the visible to near infrared (400 to 1,000 nanometres), the Specim FX10 can accurately capture changes in leaf pigmentation, the presence of macro elements such nitrogen, phosphorus and potassium, or the level of anthocyanins – pigments found in blueberries and raspberries, but also other plants – little to none of which could be gleaned from RGB cameras. “Simple algebraic combinations of the reflectance values at specific frequencies enable users to reliably monitor parameters and nutrition values, minimise energy consumption and water use, and predict the harvesting season and yield,” adds Törmälä, who points out that other Specim products delve into even greater detail: “If you want to study the mesophyll cell structure, for example, that requires 700 to 1,300 nanometres, which can be done with the Specim FX17 camera (range 900 to 1,700 nanometres).”

SweGreen is also interested in hyperspectral imaging. Teaming up with Mälardalen University, they are midway through a project that is investigating the use of hyperspectral imaging cameras to reveal plant responses to different lighting conditions, nutrient concentrations, irrigation-related stresses and other growth parameters.

But this is just one part of SweGreen’s vision for the future. “We want to add to our automation and use more robots,” says Mousavi. “If we could use vision diagnostics more, if we could read the signals of stress and distress, if we could create KPIs on the performance of the plants, and if we could also go deeper into how the look of plants impacts quality, it would be a perfect thing.”

SweGreen, Agricola Moderna, Growy and indeed most vertical farming innovators are all aiming to achieve the same feat – using a raft of sensing technologies that generate data for an intelligent closed-loop vertical farming ecosystem that optimises productivity and quality while driving down operational costs. Whoever gets it right will reap the rewards and start the “new vertical agriculture revolution” Google’s Ray Kurzweil predicted back in 2013.