Do you know approximately what the optimum daily light integral is for your crop?

I had a customer stop by our office the other day and we got to some general chit-chatting. At one point he glanced over at our 4-bucket deep water culture system we have running and he noticed the fancy induction grow light hanging over our Carolina Reaper “super hot” peppers.

To me, the underside of the light resembles something you might see in the the Roswell, New Mexico desert if you stared at the sky long enough. The combination of the soft diffuse glow of the induction bulb and the piercing, deep-red LEDs look downright extraterrestrial, but I’d be lying if I said it didn’t work amazingly well.

But when my customer asked me whether I thought the investment was worth while, at first I wasn’t sure how to answer the question as straightforward as it sounded.

Before I answer that question here, I should preface my comments by saying that I’m a big proponent of induction lighting. I think the technology is woefully under utilized, but I assumed in this case my customer’s angle in asking the question was more about saving money on electricity than it was a real desire to run induction lighting.

And frankly, I wasn’t about to suggest that my customer just go out and replace all of his current lights with induction equivalents because the investment would be substantial, and there are likely less painful ways for him to save money that he should investigate first.

In my experience, simply throwing money at problems is rarely an ideal solution.

So I asked him, “Do you know approximately what the optimum daily light integral is for your crop?” I think I may as well have asked the question in Romanian. But then I smiled to myself because I knew I was about to blow his mind.

Generally speaking, the photosynthetic rate of any plant increases proportionally with light intensity.

That is, as light becomes more intense, the more photosynthetic activity there is, and hence more plant growth. However, it is possible to reach a point of diminishing returns, and in some plant species that point approaches abruptly. Eventually photosynthetic activity is going to be limited by some other factor, and the additional light is literally wasted energy (and money). So the idea here is to determine how much light your plant can actually utilize, and then turn the lights off once that threshold has been reached. This concept is widely used by greenhouses that incorporate supplemental lighting, and is referred to as the Daily Light Integral, or DLI.

The first thing you need to do is train yourself to start thinking about light in terms of photosynthetic photon flux, and not watts, or hours of “on time”. Plants really don’t care about how many watts of power your lights consume, nor do they really care about how long the lights are “on” (within reason of course). What they do care about is how many photosynthetically active photons they’re receiving. The distinction is critical for two reasons.

Second, studies show that the length of the dark period (i.e. “lights off” time) is what controls the photoperiodic response of plants, and not how long you keeps the lights on. In other words, you’re not going to wreak any havoc on photosensitive plants if you reduce the lights-on period, so long as they receive sufficient photosynthetically active raditation (PAR). And for that, we need a PAR meter.
A PAR meter is going to measure photons that are between 400-700nm because that’s the region of the electromagnetic spectrum that’s capable of fueling photosynthetic activity in plants. The meter expresses how many micro-moles (1 micro-mole = 6.022×1017) of photons are being emitted per square meter, per second (μmol·m-2·s-1). However, DLI is usually expressed in moles per square meter, per day (mol·m-2·day-1).

To make the conversion, we need to divide our meter reading by 1,000,000, and then multiply by the number of seconds the light is on. Let’s do a quick example. Our PAR meter says that at any given time our light emits 50 μmol·m-2·s-1 and we’re leaving the light on for 12 hours (43,200 seconds) each day.

You can use this formula to convert your meter readings into DLI units, but make sure you replace the number of seconds I’ve chosen in the example above with however long you’re leaving your light on (just multiply the number of hours your light is on by 3600). Again, we’re trying to determine the cumulative total number of photons the plants received while the lights were on. Once we have a single point we have a frame of reference, and we can start finding the ideal DLI for whatever crop it is you’re growing. 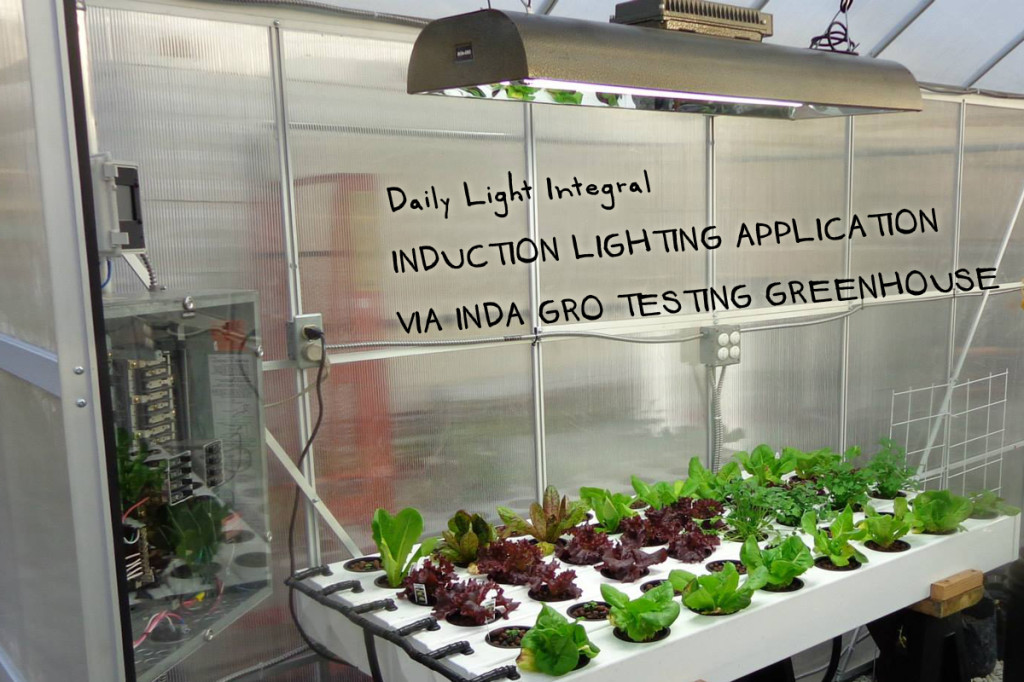 Above: Daily Light Integral being put to good use with Inda-Gro Induction Crop Lighting.

My recommendation is to simply experiment through trial and error, but I should note that this process becomes infinitely less confusing if you have fine control over your garden and the variables within. People with automated systems (i.e. no human error) will have a much easier time making sense of the data thanks to tighter control of the conditions. Photosynthesis is also tied into things like temperature and CO2 levels, so if those are swinging all over the place throughout your grows then it’ll difficult to distinguish the signal from the noise.

Whatever the case, if your garden’s environment is consistent between grows, what you’ll find is that as you increase your DLI you’ll get more branching, flower sites, and dry mass when you harvest. I’m sure no one will be surprised by that, but at some point increasing the DLI will not result in any additional growth. That should be your target DLI. Run your lights each day, and shut them off when all of the plants have achieved their DLI target.

And if you really take this seriously you can optimize the DLI for each stage of growth. It’s entirely possible that you’re using too much light in early stages of growth, and not enough in later stages. If you balance it out you may be able to increase your yield without using any more energy at all. Or, maybe you’ll find that you’re meeting your DLI requirements before your lights shut off. In that case you can probably raise your lights to cover a larger area or turn them off earlier than you have been.

When you consider how much energy some people use in running their lights, there really aren’t many arguments for not using the DLI concept. If you’re running a few thousand-watt lamps, and you find that you can reduce your lights-on time by 10%, that can still amount to a savings of a few hundred dollars a month. And all it costs you is a PAR meter and your time. With energy costs only going in one direction, how long can you afford to play fast and loose with your plant lighting? 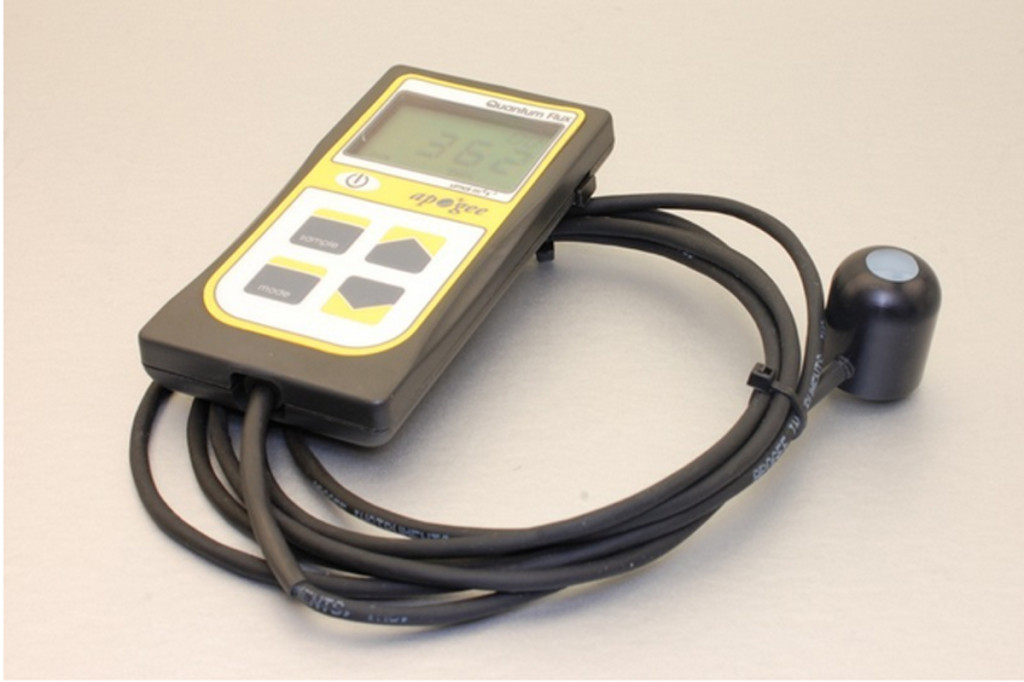 Jordan Gartenhaus is one of those people that always tries to figure out how or why things work the way they do. To that end he earned a BS in mechanical engineering, but shortly after graduating he realized his time spent in school created more questions about everything around him than answers. In an effort to prevent from overwhelming himself now he focuses just on making gardens as fruitful as is scientifically possible. He spends a lot of his time optimizing grow spaces to make the most of the resources available, and also strongly advocates quality automation systems. He would since he co-owns a company that designs and sells their own automation equipment, but despite the conflict of interest he actually does provide excellent insight into the “how” and “why” of gardening. 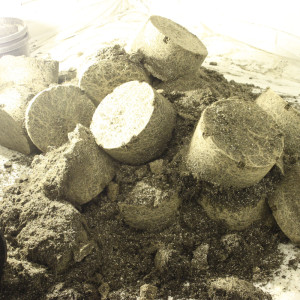 Reusing Soil  Get Growing Again and Save    Reusing soil from a successful crop is entirely...